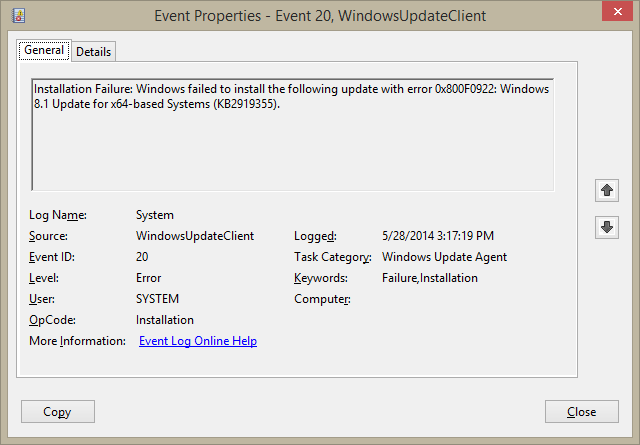 Ah, the dreaded 0x800F0922 error - bane of more than a few Windows 8.1 users trying to install Update 1 so they can get security patches in a few months. I ran into this myself, bashing my head against DISM and SFC more than a few times, until I finally decided to sit down and sort out, once and for all, what the primary cause of the error was. To do that, however, I needed an installation log, something that would tell me what was going on and where. Thankfully, Windows leaves those in C:\Windows\Logs\CBS. More specifically, I needed the CbsPersist_YearMonthDayTime.log file that was last updated right after Windows rolled back the Update 1 installation. Once I did so, I performed a quick search for the error in question:

Okay, I know I'm in the right file. Question is, what caused the installer to reach that point? To do that, I needed to search for "Error", heading from this point to the beginning of the log. Doing so revealed this:

At this point, I'll note that my PC had been configured to dual-boot between Windows 8.1 and PC-BSD using GRUB - this is important because the installation process for Update 1 expects to be able to modify key boot loader files. Since it was expecting to find Windows Boot Manager files to update and was unable to find them, the update was erroring out. To test this hypothesis, I restored the Windows Boot Manager by:


Now it was the time to figure out which partition had my Windows partition on it. To do that, I ran diskpart:

This loaded the DISKPART> prompt:

Most dual boot situations start with a PC that already has a Windows partition, which is then shrunk to make room for a Linux or BSD partition. Consequently, the first partition in such a setup is usually going to be the System Restore partition (Partition 1 in the above example), followed by the actual system partition (Partition 2), followed by the *nix partitions (Partition 3 in this example, though there can be more if you're triple-booting or if you partitioned folders like /home and /var into separate partitions). Consequently, you can usually assume that Partition 2 will be your Windows system partition and work from there. However, if you're feeling uncertain or set up your multi-boot system in some other order, you can actually confirm from here whether you're dealing with your Windows system partition or not:

Partition 2 is now the selected partition

Note that I left off some of the columns from the above output to keep the formatting straight here - the big one to pay attention to is the Fs column, which gives you the file system of the partition, assuming Windows can recognize it. By contrast, here's what diskpart will output for a UFS file system:

Partition 3 is now the selected partition.

There is no volume associated with this partition.

Alternatively, here's what diskpart will report for the System Restore partition:

Partition 1 is now the selected partition.

Having successfully identified which partition contained my Windows system partition (Partition 2 in this case), I was now ready to work against it:

Partition 2 is now the selected partition.

Note that, if you don't activate your Windows system partition in diskpart, the next few commands won't do much good.

Now it's time to rebuild the Windows boot manager. To do so, type in these commands:

That should do it - your system should now have a stock Windows boot loader once more, which means you should be able to apply Update 1 successfully. Once you've applied Update 1, you can then reinstall GRUB or use EasyBCD to restore your multi-boot configuration at your leisure.

For completeness' sake, I'll point out that I haven't tested whether or not Update 1 will apply successfully with EasyBCD or any other Windows-based boot loader managing the boot process. I'll also note that my particular solution to the dreaded 0x800F0922 error may be unique to my particular workstation, so don't be afraid to do the work, check your logs, and make sure you're experiencing the same issue I am before you dig in too deeply on this one.

Good luck!
Posted by David Colborne at 8:47 AM