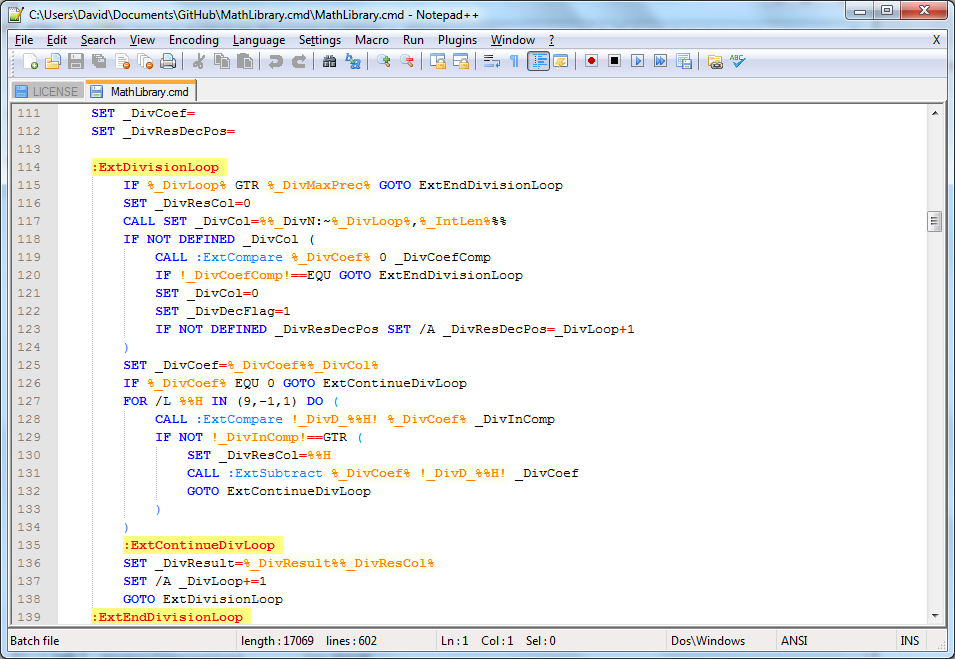 For the past few weeks, I haven't been posting much because my attention has been diverted elsewhere. The picture above is a little sneak preview of what I've been working on, which is related to my previous efforts in solving Project Euler problems using Windows batch script - it's almost ready for me to share with the world (though, if you look around, you'll find it since I have it hosted publicly in the cloud), though there are a few i's I'd like to dot and a few t's I'd like to cross before I really promote this thing.

And what a thing it is! But I'm not ready to talk about it just yet.

Instead, I would like to talk about the general topic of Windows scripting. For years, my attention has been focused on small business IT - in that environment, there's a limited amount of automation available to the IT professional, at least as long as the customer is hosting their own equipment. Though a clever IT shop can probably find some way to leverage tools like Puppet and Chef to make on-site deployments more consistent, it's a little difficult to avoid treating servers like pets instead of cattle when each "farm" only has one or two "cattle" and the "farmers" don't like to share (to stretch the already overwrought metaphor a bit). In that environment, the limited nature of old-school Windows batch scripting - a language that traces its lineage all the way back to the early days of DOS - wasn't immediately apparent. Oh sure, there was the occasional heated discussion over whether it was more intuitive to suffer through RUNDLL32's myriad flags and byzantine syntax, or through VBScript's ridiculously verbose but at least sort of intelligible at a glance AddPrinterConnection method, or to just give up entirely and use KiXtart, but the results usually didn't matter all that much in the end. By the time you were done writing a script, testing it, and rolling it out, most scripts just weren't worth the time. So, every client would have a script or two with some "NET USE" commands, some clients with more dedicated IT professionals might have a slightly more complicated batch script with a control structure in it (I was notorious about this, though not near as notorious as some of my coworkers) and that was pretty much it. In our context, PowerShell was observed, tried out, and then promptly ignored as much as humanly possible - it took more typing than CMD, we couldn't count on it being on every machine we wanted to automate (it wasn't installed by default until Windows 7/Server 2008 R2), and it didn't do anything we weren't already doing for ourselves.

These days, though, I'm dealing with a somewhat larger environment. It's still not large enough to really see the benefits of PowerShell firsthand - we're talking about less than ten servers, virtual or otherwise, and approximately 250 PCs, more or less - but it's big enough where I can certainly imagine what a larger environment would look like and some of the challenges I would have keeping things halfway consistent and manageable. That's part of the reason I've been doing the Project Euler exercises in the first place - at some point, my scripting chops will need to be ready for a larger environment. While working on my exercises, though, I've run into some pretty serious difficulties - difficulties I've been able to overcome, mind you, but ones that definitely show that CMD is, shall we say, a product of its time:

:: Insert conditional to handle occasions where _mSElapsed is negative because the script took longer than a second or it started near the end of a second.

And so on. Well, if you tried to write the script like that and ran it, two things would happen:

So, you end up writing a bunch of code like this to convince SET to, no, seriously, save the damned number as a base-10 number, please and thank you very much:

For those playing along at home, that's just a series of statements that say, if the first character in the variable is a zero, throw that zero in the trash can and just keep the last number.

Yeah. Now imagine having a thousand or so servers to manage and putting up with this. Given the utter lack of responsible error handling and the head-scratching syntax parsing, it's only a matter of time before somebody writes a script that they think checks a system's MAC address in a text file somewhere and uses netsh to assign an IP address and computer name based on that MAC address, only to have it assign the same IP address to every system or just refuse to properly parse a MAC address' delimiters in some weird corner case that magically converts it into octal or hexadecimal or base 23.7 or Roman numerals or the numbering system of Mayan moisture evaporators or something. Compared to this, bash and its ilk must have seemed like a revelation to anyone even slightly seriously interested in server automation. This doesn't even get into how there are several corners of Windows that are virtually impossible to get to via CMD unless you feel like directly editing registry values with REG (given everything covered so far, what could possibly go wrong?) or you feel like stepping into the object-oriented nightmare that is VBScript[1]. Something needed to be done. Windows needed a proper, honest-to-goodness scripting language that acknowledged some progress in interpreted languages had been made since the first term of the Reagan administration.

I'm glad Microsoft took care of that, even if it's still something that remains mostly tangential to my day-to-day administration experience. For now.

And my former coworkers wondered why I preferred CMD, even with its flaws.
Posted by David Colborne at 12:11 AM